Briefing to the President of Mauritius 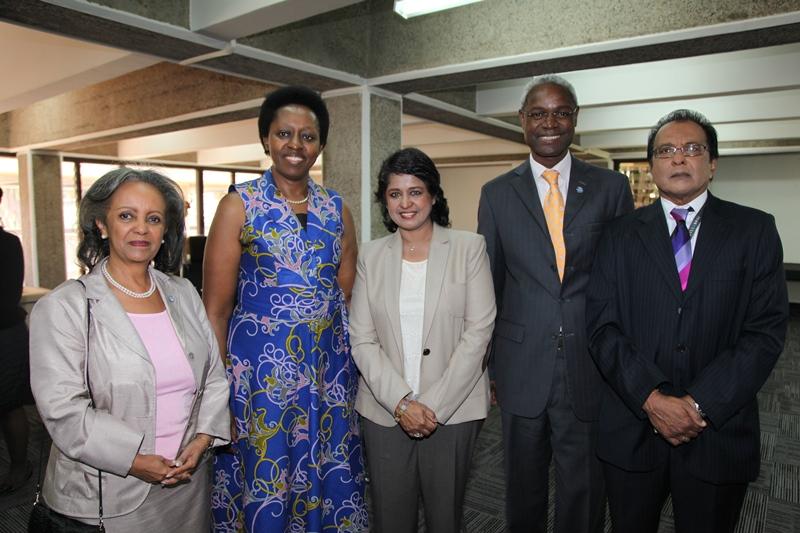 Welcome to UNON.
This is considered one of the four United Nations Headquarters in the world. The other headquarters are in New York, Geneva and Vienna. Although we are the youngest Office Away from Headquarters (OAH), Nairobi already has the third largest UN workforce in the world, after New York and Geneva.
On this compound, over 3,500 dedicated staff members of the United Nations work on a daily basis to advance the goals and values of the Organisation -- from promoting sustainable urban development to protecting the environment, and from safeguarding peace and security to providing humanitarian assistance to vulnerable populations.

This is one of the UN system’s most crucial duty stations. It contains a unique mix of global UN headquarters, UN agencies serving Kenya, Regional Offices, and peace support operations. UNON remains the only UN Headquarters in Africa, and indeed in the entire global South.
UNON hosts the global headquarters of two very important UN programmes, UNEP and UN-Habitat.

UNEP was the first UN entity to make Nairobi its home. It thus became the first global intergovernmental organization to be located in the developing world. That was after the UN General Assembly decided in 1972 that the headquarters or secretariats of UN bodies should be located having regard to equitable geographical distribution “in order to employ international machinery for the promotion of the economic and social advancement of all peoples.”

Since UNEP’s establishment, the UN’s presence in Nairobi has grown steadily. UNON now hosts some 60 different UN offices representing 27 UN agencies, funds and programmes, as well as Special Political Missions and peace support operations, including the Office of the Special Envoy for the Great Lakes Region, and the UN Support Office for AMISOM (UNSOA).
The UN presence in Nairobi continues to grow. Recently, the UN Institute for Training and

Research (UNITAR) and the UN Inter-regional Crime and Justice Research Institute (UNICRI) have established offices in Nairobi. UNAIDS has recently moved its global IT hub here, and WHO has done the same for its global security section.

UNON was created by the UN General Assembly on 1 January 1996 as a successor to the United Nations Common Services Unit at Nairobi and two separate divisions of administration of UNEP and UN-Habitat. The objective was to achieve economies of scale and ensure greater efficiency and cost effectiveness.

Towards this end, UNON provides a full range of administrative and other support services to UNEP and UN-Habitat (not only at their Nairobi headquarters but also for their offices around the world) as well common services to the other UN entities based on the UNON compound. UNON is also in charge of maintaining and protecting the compound.
UNON currently consists of five units: the Office of the Director-General, the Division of Administrative Services, the Division of Conference Services, the Department of Security and Safety, and the United Nations Information Centre.
In 2009, the General Assembly decided to establish a dedicated Director-General post for UNON, at the level of Under-Secretary-General, replacing the previous arrangement whereby the Executive Directors of UNEP and UN-Habitat were double-hatted as head of UNON, on a rotating basis.

In 2011, Secretary-General Ban Ki-moon appointed me as the first dedicated Director-General of UNON. Since my appointment, my priorities have included: strengthening the coherence and unity of purpose among UNON’s different components; improving its service delivery and client orientation; raising the profile and status of UNON as a key duty-station for the UN globally; and bringing UNON closer at par with the other Offices Away from Headquarters (Geneva and Vienna).

In addition to being in charge of UNON, as Director-General I serve as the Representative of the Secretary-General in Kenya, and as the primary interlocutor with the Host Country on issues affecting the UN community in Kenya.
I also serve as the UN Designated Official for security. In that capacity, I am responsible for working with the Host Country to help ensure the safety and security of some 15,000 UN staff members and their dependents located throughout Kenya. In that task, I am supported by my Chief Security Advisor, and a strong team from the UN Department of Safety and Security (DSS). Of course, the primary responsibility for protecting UN staff and assets rests with the Government of Kenya.
I am also mandated to advise the Secretary-General on political issues in the region. Two Political Officers are embedded in my Office to support me with those functions, in collaboration with the Department of Political Affairs in New York.
UNON itself has extended direct assistance over the years to several peace efforts in the region. This includes interpretation and conference management supports provide in 2013 to the Dialogue in Kampala between the DRC Government and the M-23, at the request of the Facilitator of the Dialogue.

UNON comprises 146 acres, generously donated by the Government of Kenya. The complex has 14 conference rooms, the largest of which has a capacity of 1,400 people. UNON also includes a media center, a recreation center, a commissary and a petrol station, which serves the entire diplomatic community.
There have been four main phases of development of the compound:

The construction of the NOF cost less than $25 million and is a leading example of a sustainable building, with several environmental features designed to make the building as energy neutral as possible.

The original blocks – A through J – are reaching the end of their life-span (40 years) and will need to be replaced soon.

UNON as a centre for high-level meetings and deliberations

UNON is hosting more and more international meetings, thus providing a vital forum for consensus building and concerted action on a range of crucial issues on the UN’s agenda. It has also been the venue for Regional Summits, meetings of the UN Security Council, and meetings on other topics such as Security Sector Reform.
In June 2014, the first-ever UN Environmental Assembly of UNEP was held on the UNON compound. This was a key milestone in the upgrading of UNEP and the implementation of the Rio+ 20 decisions.
In April 2015, UN-Habitat held its 25th Governing Council session as well as the second preparatory meeting for the Habitat III Conference here at UNON.
UNON’s attractiveness as a site for international high-level conferences was again exemplified by the selection of this compound as the venue for the sixth Global Entrepreneurship Summit (GES), which was held from 2-26 July 2015 and was attended by Presidents Obama and Kenyatta.
It is UNON’s priority to make this duty station an even more attractive venue for international high-profile conferences, and we are working closely with the Government of Kenya towards that end.

UNON is also at the forefront of the Secretary-General’s global change-management efforts, aimed at making the UN a more effective Organisation, better able to address the complex challenges of the 21st century. The major change-management initiative is called Umoja, which is the UN’s Enterprise Resource Planning (ERP) project that will streamline all administrative processes throughout the UN Secretariat. “Umoja” means Unity in Kiswahili. The name was proposed by a UNON staff member.
UNON is a pioneer in the implementation of Umoja. The three Nairobi-based Secretariat entities - UNON, UNEP and UN-Habitat – went live with Umoja on 1 June 2015 – before New York and the other Offices Away from Headquarters.

As part of the reforms, there may be future consolidation of UN global administrative functions at single locations. Nairobi would be well suited to host such a global service delivery center, given the availability of good infrastructure and skilled human resources here, and the relative cost-effectiveness of this duty station.
We will continue to work hard to strengthen Nairobi’s position as a global UN center of excellence.
Thank you for your kind attention.