Inauguration of the new Delegates Lounge 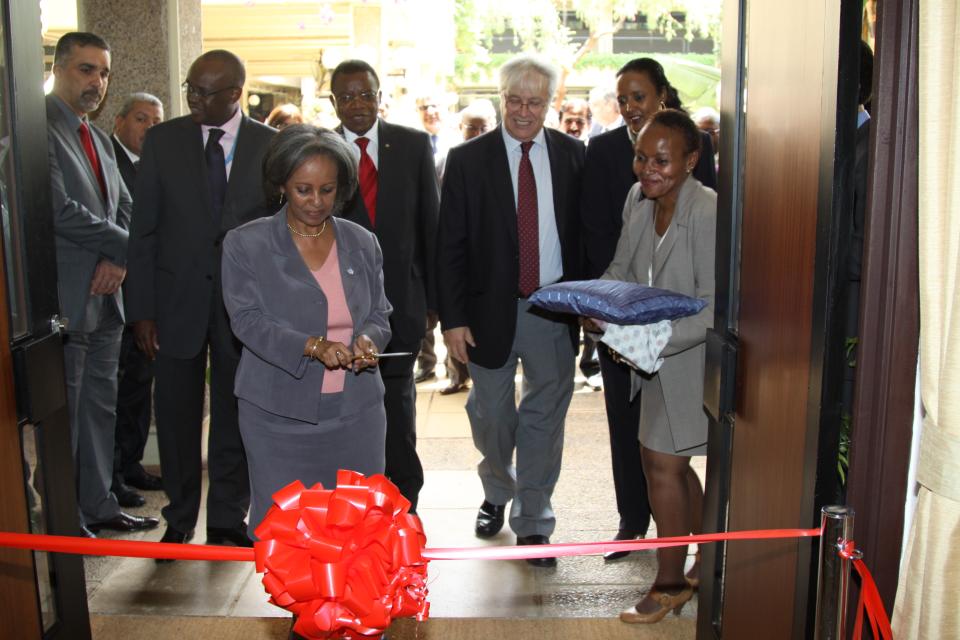 I have the pleasure of welcoming all of you to the United Nations Office at Nairobi.

Thank you for taking the time to attend the opening of our new Delegates’ Lounge.  Those of you who were familiar with the old Delegates’ Lounge would know that, after 30 years of service, it was in great and urgent need of repair.

This event marks an important milestone in our work to improve UNON’s conference facilities, and to bring them up to the standards of other UN duty stations, such as New York, Vienna and Geneva. We still have some way to go before reaching that objective.

We will proceed in a few minutes to the Delegates’ Lounge for the inauguration, but we also wanted to take this opportunity to tell you about some of the other upgrades that have been completed recently, as part of UNON’s improvement efforts, as I promised during our previous meetings with the diplomatic corps to keep you informed of all major achievements.

The Chief of UNON’s Facilities Management, Mr. Stephen Stannah, is here to provide you with details on the improvements. In addition to the Delegates’ Lounge, they include refurbishment of conference rooms, upgrading of the interpretation booths, and redesign of the information desk area.

I would like to invite you to visit the interpretation booths and conference rooms, to see the improvements with your own eyes.

I place great importance on these renovations. They make UNON more modern, more efficient and better able to use resources in a sustainable manner.

But the material improvements to our infrastructure also have a deeper significance: They demonstrate the growing importance of Nairobi as a hub for the UN’s diverse operations in the region. And they reflect the vital role that UNON is playing as the only UN Headquarters in Africa, and indeed in the global South.

UNON is hosting more and more international meetings, thus providing a vital forum for consensus building and concerted action on a range of crucial issues on the UN’s agenda. It has also been the venue for Regional Summits, meetings of the UN Security Council, and meetings on other topics such as Security Sector Reform.

In addition to the two global UN programmes headquartered here -- UNEP and UN-Habitat --, there are over 80 offices of the UN funds, programmes and agencies operating from this compound, providing assistance to some of the world’s most vulnerable populations.

And UNON has often supported peace efforts in conflict-affected countries in the region. As we speak, staff from UNON’s conference services are in Kampala to support the peace talks between the DRC Government and the M-23, at the request of the Facilitator of the talks.

We will continue to work hard to make UNON an even more dynamic, user-friendly and pleasant place to conduct the UN’s business.

As you know, much diplomacy takes place during informal exchanges among delegates, outside formal meeting rooms, over coffee.

In the renovated Delegates’ Lounge, I hope you will find a conducive atmosphere to dialogue with your colleagues -- whether to engage in quiet diplomacy, to hash out a resolution, or just to unwind after a grueling day of deliberations.

I think you will be pleased with the results of our renovation work.

The Lounge is now also very suitable as a holding room for national and foreign dignitaries, such as Presidents, Prime Ministers and Ministers.

The new Lounge includes a number of recycling and environmental features, which Mr. Stannah will explain to you. Before giving the floor to him, let me add that, as Member States, UN colleagues, and trusted partners, UNON’s facilities are here to serve you.

As we seek to safeguard peace and security, promote development, protect the environment and uphold human rights around the world, UNON remains committed to supporting your collective efforts to advance the values and work of the United Nations.

I look forward to our continued collaboration.

I also thank Member States who have chosen UNON to be the venue for some of their activities, such as the premier of a world-famous Chinese movie, a successful Korean fashion show, as well as celebrations of various National Days at our Recreation Center.

I would like to thank my UNON colleagues for a job well done. We are happy to have been able to have this inauguration a few days before the Governing Council of UNEP under the new configuration after Rio+ 20.

Thank you again for your presence here today.