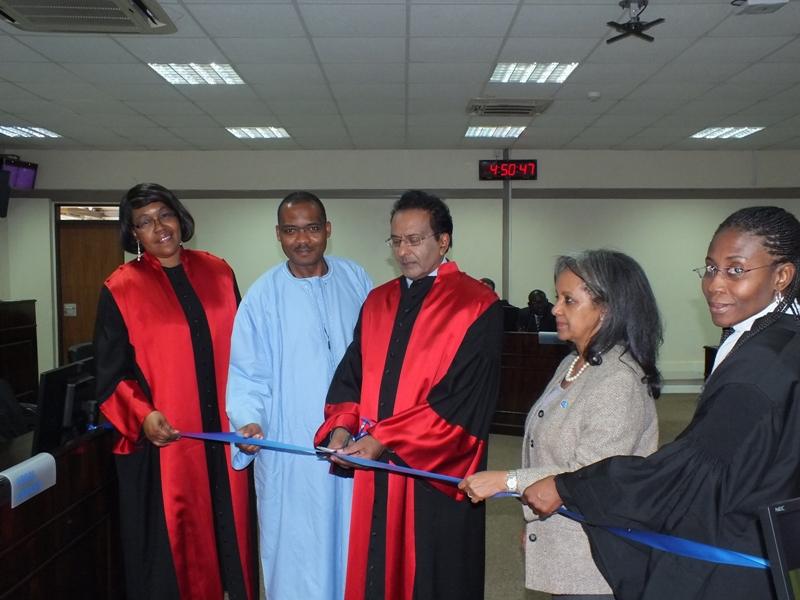 It is my pleasure to participate in this inauguration ceremony for the UN Dispute Tribunal courtroom in Nairobi. I am honoured to be with you today for this important event. The inauguration of the courtroom underscores the UN’s commitment to continuously improve the internal justice system.

The goals of the UN are lofty: peace and security, development, and human rights. But, like any organisation, work-related disputes arise, requiring a system to address situations where staff members feel that their rights have been violated and the rules of the Organization have not been respected. It is a fundamental right of staff at all levels to have recourse to an internal justice system.

That is why Secretary-General Ban Ki-moon made the UN’s internal justice system one of his top priorities for his reform agenda. Since the new system of administration of justice became operational in 2009, several significant improvements over the old system have been recognized: the case adjudication process is faster; the internal justice system is more independent; Judges of the UNDT and the UN Appeals Tribunal must meet very strict criteria, including 10 and 15 years of professional experience, respectively; legal assistance is available through the Office of Staff Legal Assistance, staffed by professional legal officers; and the system is more decentralized, with the UNDT existing in New York, Geneva and Nairobi.
This is the first permanent courtroom for the Dispute Tribunal globally. It is very fitting that the first permanent seat for UNDT hearings is found in Nairobi. This is one of the UN system’s most important duty stations, and it is the home of the only UN Headquarters in the developing world – UNON.

As the Director-General of UNON, I wish to assure you of my continued full support to the UNDT in its endeavor to carry out its mandate.

UNON will also do its utmost to encourage management and staff to make use of the Ombudsman and mediation services for informal resolution of disputes, before resorting to the formal litigation process at the UNDT.

I wish the Judges, Registrar and all the staff of the administration of justice system every success in the very important work you will carry out here.  Let us use this occasion to recognize that a more effective internal justice system means a stronger United Nations, better equipped to advance the goals of the Organisation and to create a better world for all.

I now have the honour of delivering the Secretary-General’s message on the inauguration of the new courtroom at UNON, which reads as follows:

“I am pleased to convey my warm congratulations on the inauguration of the new courtroom at the United Nations Office at Nairobi.  I applaud the Office of Administration of Justice and the United Nations Office at Nairobi for closely cooperating to equip this courtroom with state of the art digital audio-visual and recording facilities.  With interpretation booths for three languages and space for up to 50 people, this courtroom can conduct efficient hearings with parties and witnesses both in Nairobi and away from this duty station. The completion of this Nairobi courtroom comes just weeks before the fourth anniversary of the new system of administration of justice on 1 July.

We are now working to establish similar courtrooms at other duty stations as part of our ongoing commitment to internal justice. Justice demands more than good facilities; it requires courage and integrity. I count on the personnel who will work here to make the most of this courtroom in serving all staff who come here seeking justice.
The United Nations, which promotes the rule of law around the world, must always uphold justice in our own realm. In that spirit, I offer my best wishes for the great success of this new courtroom.”