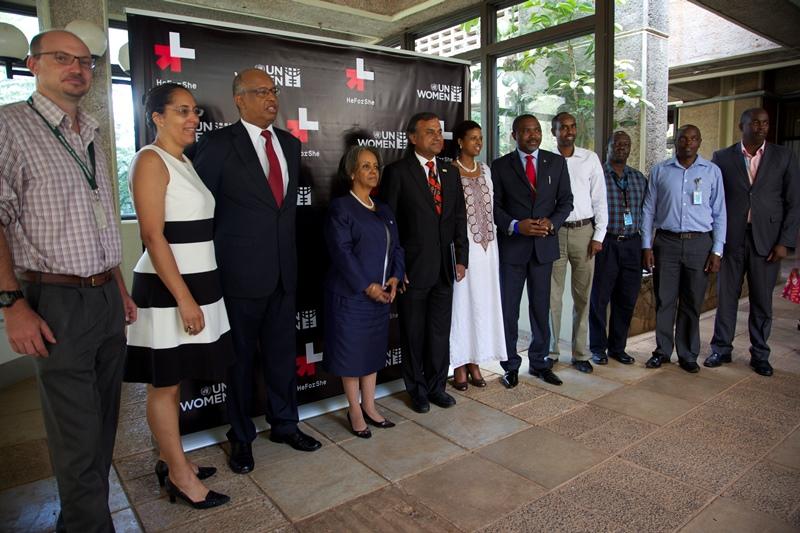 I am pleased to welcome you to the United Nations Office at Nairobi.

Thank you all for joining this special event to launch the HeForShe sign-up campaign at UNON, and also to commemorate the 2015 International Women’s Day.

Although International Women’s Day (IWD) is officially marked on March 8th, it is not too late to observe this important occasion. This is a time for us to recommit to ensuring that gender equality becomes a lived reality for all women, men, boys and girls.

This year is particularly significant as we are also commemorating the 20th anniversary of the Fourth World Conference on Women and the landmark Beijing Declaration and Platform for Action, adopted by 189 governments in 1995.

Since the adoption of the Beijing Declaration two decades ago, we have seen important advances. More girls around the world have attained more access to more education than ever before. Maternal mortality has been almost halved. More women are leading businesses, governments and global organizations.

But the gains have been too slow and too uneven. For example, women continue to suffer disproportionally from the economic crisis, from the impacts of climate change, from the displacement caused by conflict, persecution and so much else. Discrimination is widespread, as is violence against women.

2015 is a vital year for ending these wrongs, and for advancing the cause of gender equality. In July, the United Nations will host the third International Conference on Financing for Development in Addis Ababa. In September, the elaboration of the post-2015 development framework will culminate with the Summit on Sustainable Development. And, in December, a universal climate change agreement should be adopted in Paris.

In all these processes, gender equality and women’s empowerment have a central role to play, as they are essential to our sustainable future.

Today, we celebrate that Kenya has a progressive constitution that provides for the inclusion of women, youth, persons with disability and historically excluded groups. Yet, despite these gains, we must not overlook the inequalities that Kenyan women and girls continue to face. They are still more likely than men and boys, to experience discrimination, violence and poverty.

The theme of this year’s Women’s Day, “Empowering Women - Empowering Humanity”, invites us all to join in the global movement to put an end to the discrimination against women and girls, in Kenya and around the world.

As the Beijing Declaration so succinctly stated: “Women’s rights are human rights”.

Campaigns such as the HeForShe, which UN Women initiated last year, are crucial because they recognize and harness the critical role that men play in the struggle for gender equality. This Campaign, which is a global solidarity movement, seeks to engage men and boys as advocates and agents of change for the achievement of gender equality and women’s rights.

As Secretary-General Ban Ki-moon said, when he became the first person to sign-up for the HeForShe campaign during a special General Assembly event last September: “Over the years, men have supported the women’s movement. But for the most part, it was just that: a women’s movement – when in fact gender equality is the responsibility of all people. We need to say to men and boys: Do not raise your hands in violence – raise your voices to stop it.”

Since then, hundreds of thousands of men and boys from around the world have joined the HeForShe campaign.

I am pleased to note that in Kenya, His Excellency President Uhuru Kenyatta officially committed and assumed the role of lead HeForShe Champion in late November 2014.

Today, I am especially pleased to join the men in leadership within the UN family in Kenya, who have heeded the calls of Secretary-General Ban Ki-moon and President Kenyatta, and committed to signing up as HeForShe champions.

Thank you to Mr. Achim Steiner, Executive Director of the United Nations Environment Programme, Mr. Siddarth Charterjee, United Nations Population Fund Country Representative for Kenya, and Mr. Uchenna Emelonye, Senior Human Rights Advisor at the Office of the High Commissioner for Human Rights (OHCHR) in Kenya, for joining us and sharing your perspectives on why men must be part of the movement towards gender equality.

Thank you also to the other male colleagues from various UN Agencies who have joined us this morning.

To the young men of the Model United Nations representing various universities here today, I welcome you to UNON and commend you for your commitment to stand up and be counted as HeForShe Champions. I am especially keen to learn from you, about what the UN and others can do to forge more effective partnerships with you, to advance the equality of women and girls. I challenge you to take back the HeForShe message to your universities, reaching out to your peers, speaking out against discrimination and signing up more young men to this Campaign. The UN stands ready to support these efforts.

I wish you all fruitful deliberations.

Thank you for your attention.