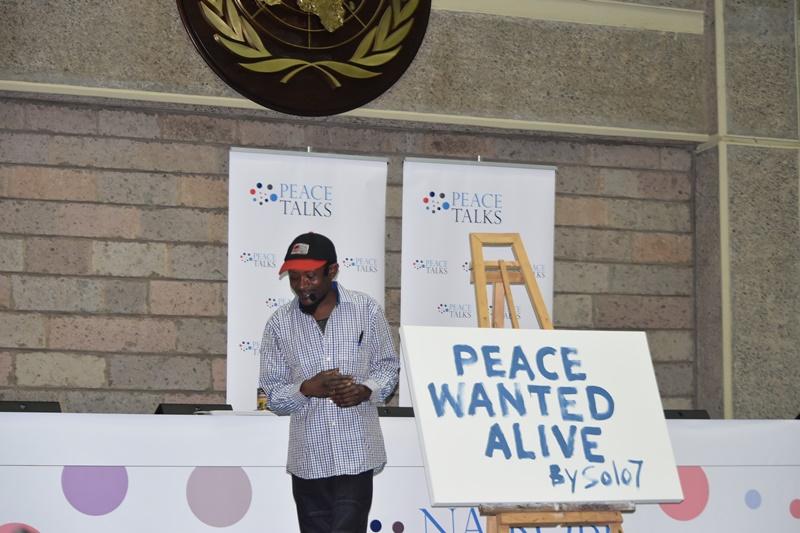 It is my pleasure to welcome you to the United Nations Office at Nairobi.

I am honoured to join you for this special event -- the Nairobi Peace Talks -- which is co-organized by the National Cohesion and Integration Commission of Kenya and Interpeace, with the generous support of the Swiss Embassy.

When I hear the term “peace talks”, my first instinct is to think of negotiations among warring parties aimed at finding a peaceful resolution to a violent conflict. And while the issue of peace negotiations will certainly be raised here, these  “Nairobi Peace Talks” are not negotiations or peace talks per se, but rather, “talks about peace”, discussions on how to prevent societal tensions form erupting into violence, and reflections on how to strengthen our respective conflict-prevention efforts.

This is an extremely important topic, and one that is central to the agenda and work of the United Nations.

When the UN was founded 70 years ago, the prevention of armed conflict through the peaceful settlement of disputes was at the heart of the Charter. Since then, the UN has deployed considerable efforts and resources to promote peace and stability – through preventive diplomacy, mediation, peacekeeping and peacebuilding, with both successes and setbacks.

But the world has changed dramatically since the UN was founded in 1945, and so too has the nature of conflicts. The UN Charter sets out rules on how to prevent and resolve conflicts between States, but today’s challenges to peace and security often come within States, and often from non-State actors. The lines between terrorists, transnational criminals and extremists are blurring.

The way the UN has responded to conflicts has also evolved considerably over the years. For one thing, there is a much greater understanding that peace does not just mean the absence of violence. It also requires tolerance and mutual understanding, inclusive institutions, social justice and equality.

The United Nations is committed to building a culture of prevention, to take early action to defuse tensions and create space for dialogue before conflict erupts.

Similarly, the importance of involving a wide range of stakeholders in peace efforts is increasingly well understood, and increasingly put into practice.

The United Nations cannot do this work alone. To achieve our shared goals, all actors need to join hands as never before – Governments, business, civil society, communities and individuals around the world.

That is why I am very pleased with the theme chosen for this event, “I Contribute to Peace”, which aims to inspire broad reflection on how everyone has a role to play in promoting peace.

The Peace Talks are an event series where speakers from different sectors share their personal stories, ideas and practical solutions to build peace. They began in 2013, with the “Geneva Peace Talks”, co-organized by the United Nations Office at Geneva, the Geneva Peacebuilding Platform and Interpeace.

It is very appropriate that this session of the Peace Talks, the first one to be organised in Africa, is being hosted by UNON. As you may know, UNON is the only UN Headquarters in Africa, and indeed in the entire global South. This campus serves as a major hub for UN operations around the world. Some 60 different offices representing 24 UN agencies, funds and programmes are located here, serving some of the world’s most vulnerable populations.

Several UN peace support operations and special political missions have also been based on this compound. For example, currently, we host the Office of the Special Envoy for the Great Lakes Region, and the UN Support Office for Somalia (UNSOS), formerly UNSOA.

UNON itself has also been called on at times to assist real peace talks, including through the provision of our interpreters, translators and other conference service personnel to support negotiation sessions and mediation processes.

This is not only an appropriate venue for the meeting, it is also a very relevant time to be having these discussions about peace. As we all know, we are living in a time of global turmoil. Violent conflicts in the world have tripled since 2008, and more than 60 million people are now displaced because of war and persecution around the world.

But this is also a time of great opportunity, as the world charts a roadmap towards a more peaceful and sustainable planet, and the UN works to become fit for purpose.

This year, efforts are underway to strengthen the UN’s work in peace and security, with major reviews of our peacekeeping, peace-building and political efforts, as well as on the implementation of Security Council Resolution 1325 on Women, Peace and Security.

And, of course, seven weeks ago, world leaders adopted the 2030 Agenda for Sustainable Development – 17 goals that build on the Millennium Development Goals (MDGs) to eradicate poverty, fight inequality and promote a life of dignity for all. One of the goals – Goal 16 – is to promote peaceful and inclusive societies for sustainable development.

I am therefore very pleased to welcome all of you to the Nairobi Peace Talks at UNON. UNON is ready to work closely with Interpeace in the future to keep this initiative alive, as you are doing with our sister Office, UNOG, in Geneva. I am particularly happy that so many distinguished conflict-resolution practitioners and experienced peace advocates are with us today. We can all learn a lot from them.

I hope you enjoy the event today.

I would now like to welcome our moderator, Ms. Victoria Rubadiri.