UN70 Celebrations at the University of Nairobi 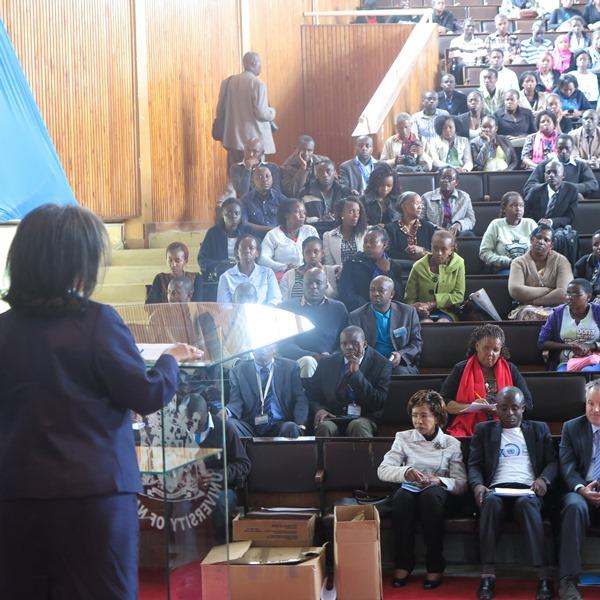 It is a pleasure to join you here today to participate in this interactive discussion on the work and future of the UN, as the Organization marks its 70th anniversary.
Thanks to the University of Nairobi for hosting this event, and thanks to all those who have taken the time to attend this discussion.
We live in an era of unprecedented globalization and interdependence. No single nation alone can tackle the threats and challenges facing our world today.
Many trans-border challenges require coordinated global responses: climate change, the spread of pandemics, transnational crime and terrorism, trade barriers, the flow of refugees and other migrants, to cite a few examples.
The people hardest hit by these challenges have tended to be those with the least power.
At the same time, with the growth in the size of emerging and developing country economies, together with the growth in South-South development co-operation, global geopolitics is changing. The relative power and economic weights in the world are shifting, and the voice of the South is demanding to be heard as never before.

The structures of the United Nations and other multilateral institutions largely reflect the economic and political realities that existed at the end of World War II. Those realities are very different from the situation that prevails today.
As a result of the new global realities and new set of challenges, it is fair to ask: is the UN fit-for-purpose in the 21st century?

What needs to change? How can we reform the UN so that it can more effectively address the challenges facing present and future generations on our planet?

I hope to hear some of your views and thoughts on these questions during our interactive discussion today.

Some of the constraints facing the Organization are structural. For example, we all know how the veto power has at times prevented the Security Council from taking action in the face of threats to international peace and security. Security Council reform, however, is a matter for the Member States, not the UN Secretariat.
The UN’s capacity to respond to crises and challenges is being stretched to the limit across our agenda – peace and security, development and human rights. The demands placed on the UN have never been greater, at a time when resources are not as readily available as in the past.
The UN needs to break down some of its internal silos that sometimes stand in the way of timely and effective action. Much progress has been made towards “Delivering as One”, but more needs to be done to reach this goal.
The UN also needs to find new ways of partnering and working with a wide range of stakeholders – private sector, civil society, religious groups, the media, academia and others. Progress has been made in this area as well. The UN today is much more open and accessible to non-Governmental partners than ever before.

In spite of its difficulties, the UN has recorded many achievements over the past 70 years: decolonization and the successful struggle against apartheid; we have defeated deadly diseases; protected human rights; responded to humanitarian emergencies; promoted peaceful resolutions of conflicts; and helped build responsive institutions of governance.
We all live safer and more orderly lives thanks to the globally-accepted norms and standards set by the United Nations in communications, transportation, trade and other areas.
For the past 15 years, the eight Millennium Development Goals (MDGs) have guided our development efforts, producing the most successful anti-poverty movement in history and helping to improve the lives of millions of people.
Those are just a few of the UN’s achievements since its creation in 1945. There are many more, most of which are unfortunately below the radar screen of the media. But it is clear that much more needs to be done to address the many complex challenges in today’s troubled and turbulent world.

2015 is not only the 70th anniversary of the UN, it is also a year for Global Action, “a watershed year” for the United Nations for having spearheaded global efforts towards building a more equitable and sustainable world for all.
The new Sustainable Development Agenda, with 17 goals to eradicate poverty, fight inequality and tackle climate change by 2030, was unanimously adopted by the General Assembly at its historic meeting last month. The SDGs are people-centered and planet-friendly. They encompass the work of the MDGs and make the agenda more ambitious and universal, while breaking new ground on how to link peace and security with sustainable development.
The Climate Chance Conference to be held in Paris this December will hopefully result in an internationally binding universal agreement on climate change.
Indeed, 2015 will be remembered as one of those rare times when concerted and extraordinary global efforts were made to contribute to the betterment of humanity.
This is an era of wondrous opportunity.  Yours is the first generation that can wipe poverty from the face of the earth.

At 70 years old, the UN remains as vital, relevant and indispensable as ever. If it didn’t exist, we would have to create it.
Quote from the SG’s message on UN Day 2015: “Seven decades after its founding, the United Nations remains a beacon for all humanity.” (end of quote).

However, our goal is not be to preserve the status quo. It is to reform and adapt the United Nations so that it can move with the speed of the 21st century, to tackle today’s complex challenges and drive our world forward.