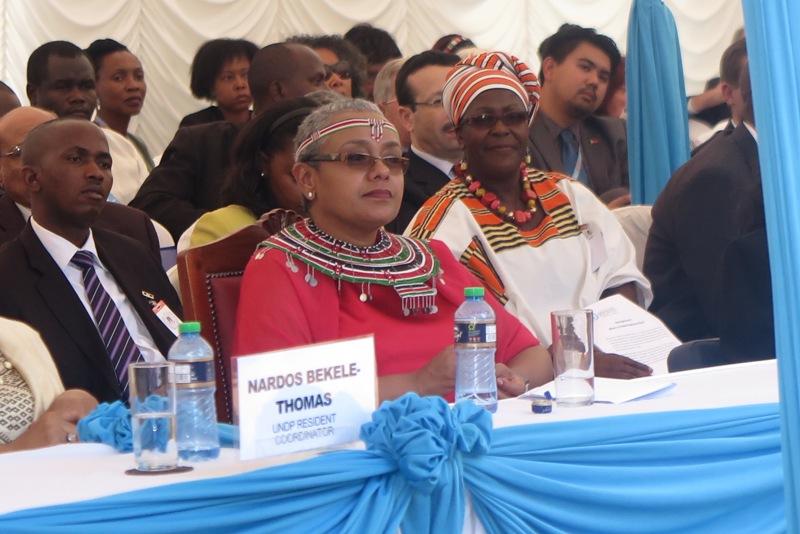 The recent global financial crisis has shown us how profoundly interdependent countries have become.  It is more and more clear that we are as interdependent for our collective security, as seen in the current fight against terrorism and extremism than in all collective endeavors to combat the Ebola outbreak.

As the former SG Kofi Annan called it “problems without passports, problems that know no boarders, uninvited, problems of armed conflicts, proliferation of weapons, degradation of our environment, Human rights violators, chronic starvation to name but a few.

I have the pleasure of welcoming you to the United Nations Office at Nairobi. Thank you all for taking the time to attend this UN Day celebration.

I would like to add my voice of congratulations to the First Lady on being named the 2014 UN in Kenya Person of the Year. This is a well-deserved recognition of the First Lady’s dedicated and inspiring efforts to stop the preventable deaths of mothers and children in Kenya.

This recognition of the First Lady’s work in maternal and child health is also a reflection of the ever-growing partnership that exists between Kenya and the United Nations.

Kenya is a key member of this Organisation. Kenya has played and continues to play an important role in regional peace-making efforts. It is a firm advocate for multilateralism. And it has a proud tradition of participation in United Nations peacekeeping operations in countries affected by conflict around the world.

Kenya is also home to the UN Office at Nairobi – UNON – which is the only UN Headquarters in Africa, and indeed in the developing world.

The special role played by this duty-station in the global United Nations system cannot be underestimated. Nairobi is home to thousands of national and international United Nations staff members, who work on a daily basis to advance the goals and values of the UN in Kenya, in the region, and around the world.

Nairobi is the global headquarters of two very important UN programmes, UNEP and UN-Habitat. It is also the base for scores of offices of the UN agencies, funds and programmes, as well as Special Political Missions,  that serve some of the world’s most vulnerable populations.

I would like to take this opportunity to thank the Government of Kenya for its crucial role in making Nairobi such an important UN duty station, and for its steadfast support to the United Nations as a whole.

This UN Day is taking place at a time when our Organization is being severely tested -- from armed conflict to terrorist insurgencies, and from renewed geo-political tensions in Europe to the outbreak of the Ebola virus in West Africa. By their very number, and also by their gravity, the many crises taking place almost simultaneously in different parts of the world collectively constitute what could arguably be the greatest challenge that the international system has faced in many years, if not decades.

It is precisely at times like these that the work of the United Nations is the most important - to combat poverty and hunger, to coordinate the global response to emergencies, to promote peaceful resolution of conflicts, protect human rights, protect the environment, and advance mutual understanding and a culture of peace.

From this UN compound, more than 3,500 dedicated staff members are making their contributions to the global efforts aimed at tackling these and other challenges.

Two weeks ago, two of our colleagues based on this compound – one from UNICEF and the other from the UN Support Office for AMISOM (UNSOA) - were appointed by Secretary-General Ban Ki-moon as Ebola Crisis Managers in Guinea and Sierra Leone, as part of the United Nations Mission for Ebola Emergency Response (UNMEER). This is just one manifestation of the tremendous skill and commitment that exist on this compound.

Whether part of country teams, regional offices, global programmes, secretariat entities or special political missions, the members of the UN community based in Gigiri are doing their part to make the world a better place. On this UN Day, I wish to express my appreciation to the staff for all your efforts.

I now have the distinct honour of delivering the message of the Secretary-General on the occasion of United Nations Day, which reads of follows:

“The United Nations is needed more than ever at this time of multiple crises.  Poverty, disease, terrorism, discrimination and climate change are exacting a heavy toll.  Millions of people continue to suffer deplorable exploitation through bonded labour, human trafficking, sexual slavery or unsafe conditions in factories, fields and mines. The global economy remains an uneven playing field.

The founding of the United Nations was a solemn pledge to the world’s people to end such assaults on human dignity, and lead the way to a better future. There have been painful setbacks, and there is much work ahead to realize the Charter’s vision.  But we can take heart from our achievements.

The UN Millennium Development Goals have inspired the most successful anti-poverty campaign ever.  United Nations treaties addressing inequality, torture and racism have protected people, while other agreements have safeguarded the environment. UN peacekeepers have separated hostile forces; our mediators have settled disputes and our humanitarian workers have delivered life-saving aid.

At this critical moment, let us reaffirm our commitment to empowering the marginalized and vulnerable.  On United Nations Day, I call on Governments and individuals to work in common cause for the common good.”

I now have the honor of inviting Ambassador Amina Mohamed, Cabinet Secretary for Foreign Affairs of the Republic of Kenya to make her remarks.

The world is changing and with it the expectations and demands on the UN.

The UN is engaged in critical projects of reform such as Umoja, the ERP which is expected to change the way we do business.  Umoja will be rolled out in this duty station in June next year, making Nairobi the first among the UNHQ out of the other two offices away from HQ.