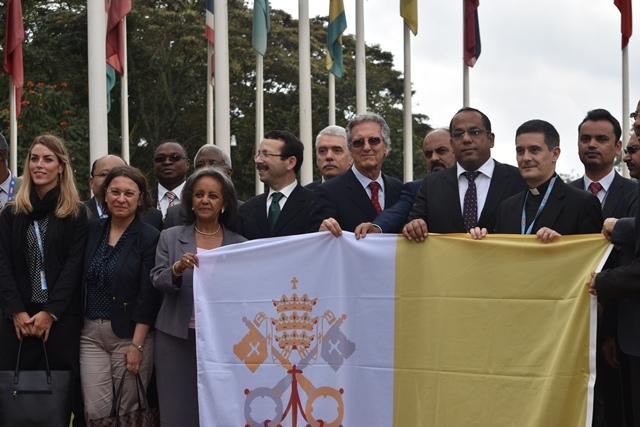 I am pleased to join you today for this very special occasion: the raising of the flags of the Holy See and the State of Palestine here at the United Nations Office at Nairobi.

As you know, the two flags are being raised in accordance with a resolution adopted by the UN General Assembly on 10 September 2015, whereby the flags of non-member observer States are to be flown at United Nations Headquarters and Offices, following the flags of the States Members of the United Nations.

The flags of the two UN observers were raised at UN headquarters in New York for the first time on 30 September. They were then raised at the United Nations Office at Geneva on 13 October.

Today, all of us at this UN Headquarters -- the only one in Africa and indeed in the entire global South -- now have the privilege of witnessing this important event.

The raising of the flags of the Holy See and of Palestine serves to raise our hopes: Hope that, through collective action, the complex and inter-connected challenges of our time can be effectively addressed, hope that inter-cultural dialogue and mutual understanding will help build a more peaceful and harmonious world, and hope that all the ideals laid out in the UN Charter 70 years ago can be realized for the benefit of present and future generations.

As His Holiness the Pope stressed at the General Assembly this year, the United Nations Organization and its activities, “like any other human endeavor, can be improved, yet it remains necessary”.

As Secretary-General Ban Ki-moon said when the Palestinian flag was raised in New York in September: “This is a day of pride for Palestinians around the world”. He added that: “Now is the time to restore confidence by both Israelis and Palestinians for a peaceful settlement and, at last, the realization of two states for two peoples. I sincerely hope that a successful peace process will soon yield a day when we unfurl the Palestinian flag in its proper place –

among the family of nations as a sovereign Member State of the United Nations.”  End of quote.

Thank you for coming to this brief ceremony today, and thank you for your kind attention.